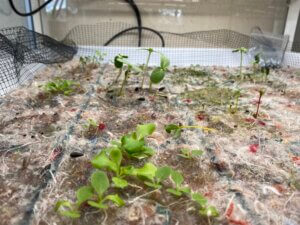 This year, Dandelion gave over 100 Grow Cubes to secondary schools across Scotland. The Cubes are one metre squared versions of a vertical, hydroponics based growing space, which will allow the students to watch their seeds germinate and then perform experiments on the plants to see how different actions and growing conditions affect them. Hydroponics and vertical farming, though not new methods, are becoming increasingly important as a reaction to climate change and the need to produce more, local food in the future. We aim to inspire the next generation to take our progress even further. 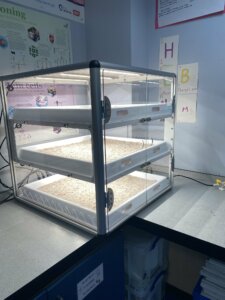 What is hydroponics and how does it work?

Hydroponics is the growth of plants in a substance that lacks nutrients (such as rock wool, coir, pearlite, etc) where the nutrients are delivered via water. It is often found in vertical farming because it can be more compact and therefore weigh less than soil. Hydroponics is also a common method of production for crops such as tomatoes, which are otherwise very seasonally specific and traditionally only would have been available in UK supermarkets via import. 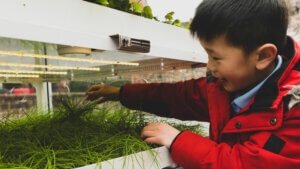 On the industrial scale, plants are grown in a light and temperature controlled, carbon dioxide rich environment (humans breathe out carbon dioxide so maybe there’s something in the lore of talking to your plants), while they are continually fed a very specific balance of nutrients based on where they are in the growth cycle.  While arguably more labour intensive than traditional methods, it leads to greater yields in a more compact space (tomato vines can grow up to 15 metres!).  Plant growth can be regulated by adjusting the wavelength of the lights in order to ensure the freshest produce with reduced waste. Additionally, the ability to grow food products such as tomatoes on such a large scale in the UK helps to cut down on food miles and carbon emissions. 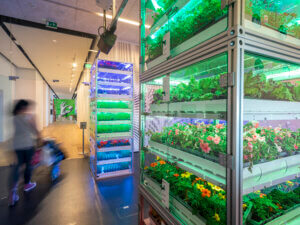 Though hydroponics is often a method used in large scale vertical farms, it is also a very accessible method for the home grower, especially with a few basic DIY skills.  A simple home system can be made using a bucket or other plastic storage container and a bit of trial and error. It’s important to ensure that the water has an oxygen source (plant roots need oxygen), algae doesn’t build up and that the nutrient levels in the water are carefully maintained but a home setup would be an excellent science experiment for all ages. Before you know it, you’ll be creating a full hydroponics setup and growing so much salad that you’ll need to start supplying the local shop!