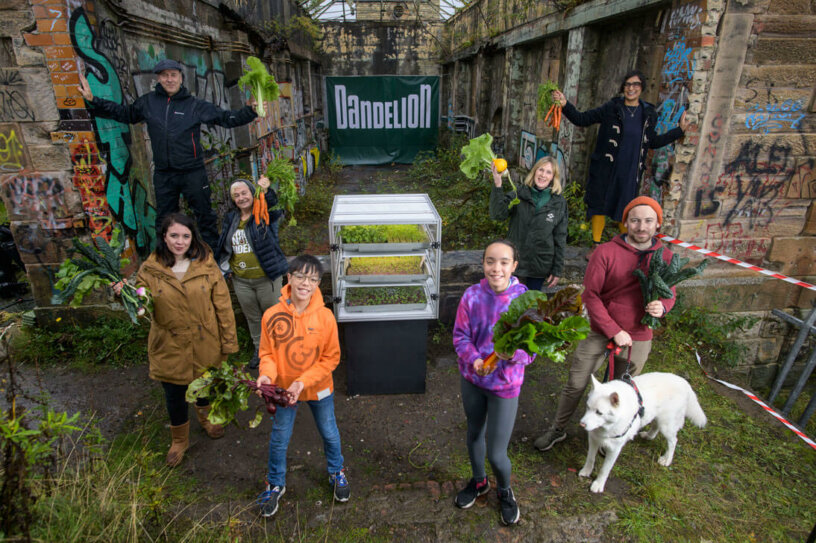 This nation-wide, ‘grow-your-own’ initiative invites people across Scotland and beyond to reconnect with the food we eat and the way it's produced. Beginning in April 2022 and following the arc of the growing season through to September, Dandelion will explore both traditional growing practices and new techniques: think of no-dig beds alongside seedlings planted in light-filled cubes. The project will culminate in hundreds of Harvest events across the country, reimagined for the 21st century, as well as two major, free, outdoor festivals.

Commissioned by EventScotland, and funded via the Scottish Government, Dandelion is Scotland’s contribution to UNBOXED: Creativity in the UK.

Thirteen Unexpected Gardens, established and nurtured in partnership with arts and community organisations from across the country, are at the heart of the project. Springing up in all sorts of surprising spots, from the Borders to the Highlands and Islands, they’ll be places to grow vegetables, herbs and flowers, to gather for activities, workshops and performances, and to share food, produce and knowledge. Appearing at the gardens and locations across Scotland are Dandelion’s Cubes of Perpetual Light, miniature vertical farms containing seed trays bathed in LED light and blending design, technology, art and horticultural expertise. Emanating from inside each of these glowing installations will be new music commissioned from Scottish and international artists. Two major, free, outdoor festivals will bookend the summer in coming Glasgow and Inverness.

Alongside this public-facing programme, Dandelion will also be inspiring the next generation of growers, distributing over 100 specially-adapted growing cubes to schools around the country. In a major community-led growing experiment, pupils will become citizen scientists, comparing innovative growing techniques with traditional methods. They’ll then share the food they’ve produced with their families at hundreds of playground harvest events in the autumn.